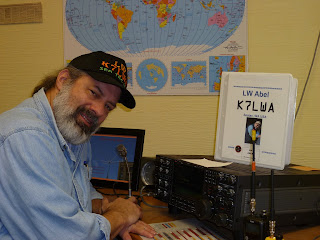 I am sure many have noticed the absence of LW on the net the last couple of months and his cheerful banter, helpful advice, and boundless enthusiasm for amateur radio. He didn’t want to trouble anyone with the news of the aggressive cancer which silenced his voice yesterday at 1:12 PM local time.

He was born in 1950 in Hershey Pennsylvania and knew a lot about chocolate. Some of you may know he has a twin sister Beth. He lived and worked in many places including Pennsylvania, Carson City, Reno, Irvine, and a stint in England. He was working in programming, IT, and the phone product support line for the Pick program when he met Shelley, KF7TBA, in 1992 and ended up moving to Seattle in 2001.

LW had an insatiable curiosity and a keen mind for science, not just radio and computers, but geology, evolution, biology and meteorology. An avid history buff he had an encyclopedic knowledge of the civil war. He was also a master gardener.

LW was my Elmer and was the sole reason my wife Sue, KI7RXI, and I made it on the air.

We have lost a great man, a great mind, a kind and gentle spirit, a friend, a brother, and a partner. 73 and safe travels through the universe LW.