(from: Live meteor echoes at LIVEMETEORS.com)
Listen Live to meteors! [Link]
This PING's for you! [Link] 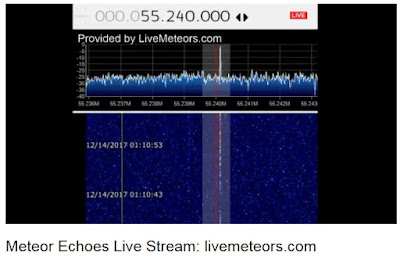 (from: Live meteor echoes at LIVEMETEORS.com)
When a meteor enters the Earth's upper atmosphere it excites the air molecules, producing a streak of light and leaving a trail of ionization (an elongated paraboloid) behind it tens of kilometers long. This ionized trail may persist for less than 1 second up to several minutes, occasionally. Occurring at heights of about 85 to 105 km (50-65 miles), this trail is capable of reflecting radio waves from transmitters located on the ground, similar to light reflecting from a mirrored surface. Meteor radio wave reflections are also called meteor echoes, or pings.

In order to listen to meteor echoes, you need a powerful transmitter in VHF band (ideally a tower broadcasting analog TV on a channels 2-5) located not too close but not too far either from you, a TV antenna, a VHF receiver... and patience.

The meteor detector at LIVEMETEORS.com is located in DC Metropolitan area and is currently pointing the Yagi antenna at a TV tower in Canada broadcasting on channel 2 analog TV, around 55.24 MHz, or based on availability and propagation on channel 3 analog TV, around 61.260 MHz, likely located in Timmins, ON. Receiver is RTL/SDR and software is SDR#.
Please see: