--  For the Ladies --
Are you interested in joining the
new Ladies' HAM Group, The Juliets?
Well, here's your chance.
Please email Hollie [K7JIB] for details:
cqk7jib@gmail.com 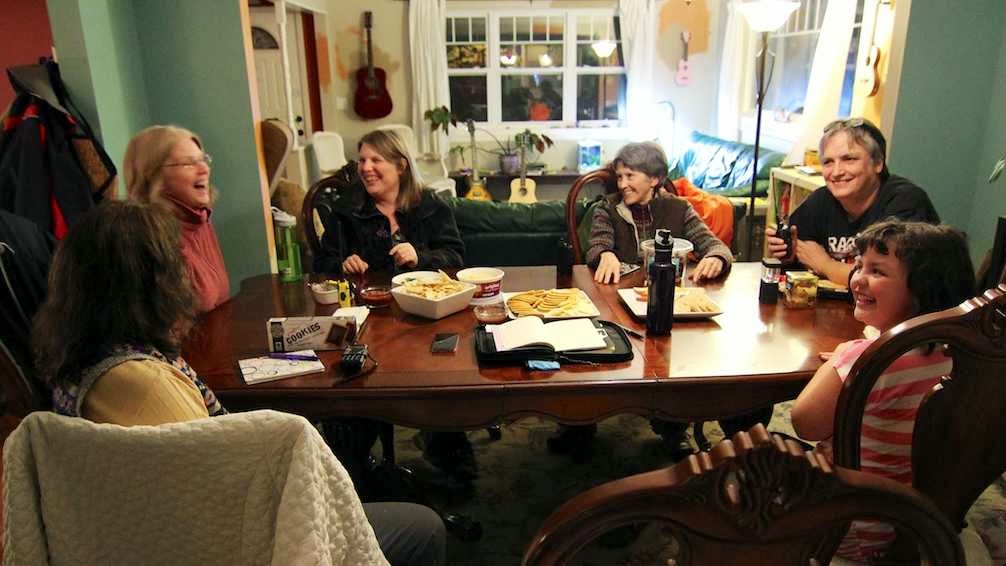 The organizing meeting of The Juliets
(February 26, 2014)

Jessica [KF7UHK] -- Hit the Lights!
Every Thursday at the
Rockin' M BBQ

Many of the recently licensed (and/or upgraded) Amateur Radio Operators (HAMs) in the greater Seattle area get their first chance to exercise their Push-To-Talk (PTT) thumbs by making their FIRST NET CHECK-IN on the Puget Sound Repeater Group's VHF repeater located on Seattle's Queen Anne Hill.
A generous number of these "Net Checker-Inners" have earned their HAM "tickets" by attending one of the many HAM classes taught locally at various Amateur Radio Clubs and venues.
Although many of these classes target just individual Amateur Radio Subelement Classes (2=Technician, 3=General, 4=Extra), Scott Honaker [N7SS] of MicroHAMS (Kirkland, WA) developed the innovative Technician/General Hybrid classes.
Within the past 2 years, many HAMs attended Scott's classes, as well as, those classes taught by Daniel Stevens [KL7WM] and his Training Team in Edmonds, Ballard, Tukwila, Federal Way, Auburn. The Team has been responsible for constantly incorporating feedback from the students to improve the "training methods" -- so every class is different from the previous one.
(For more insights about this, please see the recent Post [Hybrid Training] Daniel (KL7WM)'s Newsletter for Instructors and Teachers).
Of course, as important as the classes are, it is equally important to gratefully acknowledge all the help from those who provide facilities for the classes.
Equally indispensible have been the numerous Volunteer Examiners (VEs) who spent hours testing the prospective HAMs.   Please find the the Winter 2014 issue of ARRL's "Radio Waves" below: 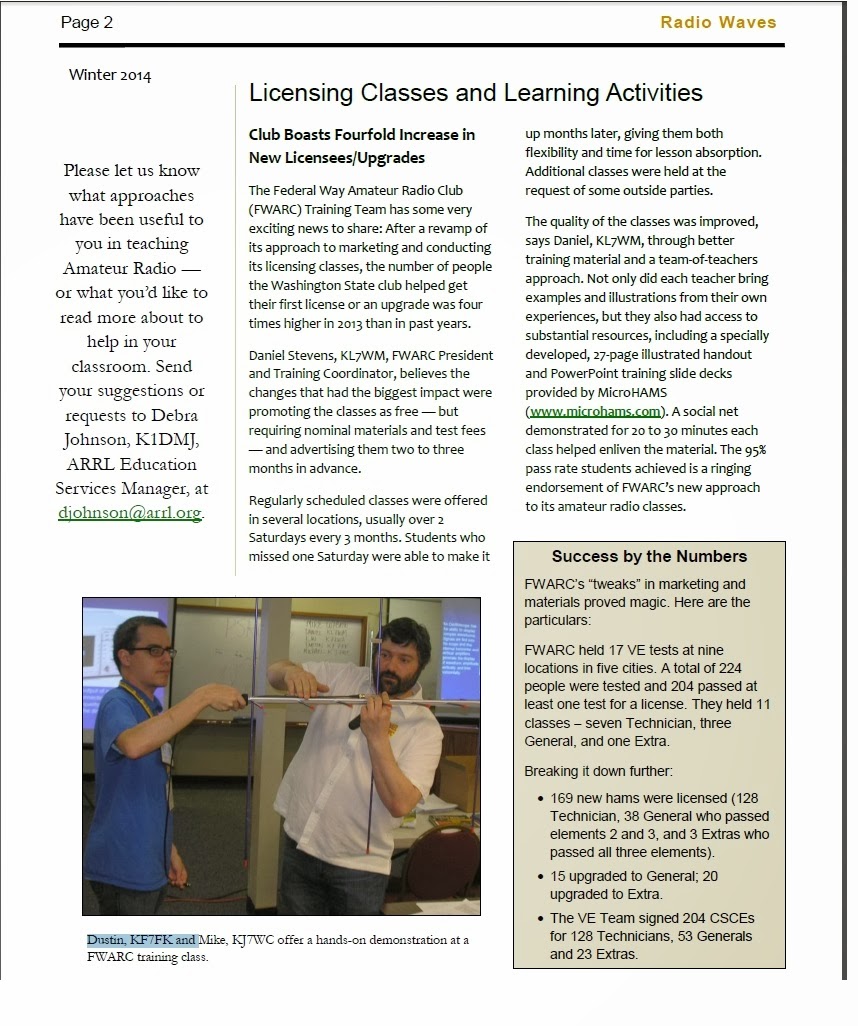 Here is the article from Radio Waves newsletter.

Debra Johnson, Education Services ARRL, asked us to talk about our Training Program in Federal Way. The article is in the current Radio Waves newsletter that is attached or you can find the article at ARRL's "Radio Waves"

The 2013 year has been an UNUSUAL year for the Federal Way Amateur Radio Club’s Training and Licensing program. We did 6 or 7 things different.  The first was to advertise our classes on the ARRL "Find a Class" and "Find an Exam" web pages. Next was the appointment of an Assistant Training Coordinator, LW Abel, K7LWA.  Another assistant coordinator came on board in Ballard to help organize those classes, Mike Walsh, W7BMW.  Our VE program found several others who also joined our teaching team, Dustin Lomax, KF7FK, Michael Hall, KJ7WC, and Howard Schultz, KB7SWA. Several organizations partnered together with us to hold classes: the City of Auburn department of Emergency Management, the Auburn Valley Repeater Group, the Edmonds Open Bible Church, the Maplewood Rock and Gem Club, the Muckleshoot Indian Tribe, the Multi Service Center, the Philadelphia Church Center, the Royal Rangers, and the City of Tukwila Department of Emergency Management. We are building a great team that works and teaches together.
The teachers and VEs TALKED together to help make a better program. This sharing of ideas and working together makes us a team. Many of our new teachers came from our licensing classes and VE system. Some came from the 9 O’clock social net on the Puget Sound Repeater Group (PSRG)’s repeater and through LW's efforts to promote our classes. The net has met at 9 O’clock AM and PM 7/365 for years in the Seattle area. We found people who were willing to help. I believe you find talent and help anywhere. Most of our team have their Extra licenses, but not all.  You don't have to be the best, just willing to help. A leader has to be willing to accept help and share the opportunities.

We are finding enough HELP to have teachers and VEs in the north end and others in the south end of the Seattle/Federal Way/King County area. Some participate in both areas. Please note we have taught classes from as large as 28 to as small as a class of one.  If someone wants a license our team goes out of their way to help them get licensed. Our team was able to help two British amateur get their US licenses while they were in the US for a week of work. They come each year. There were 6 teachers and 23 VEs in the program in 2013.

We have taught Large and Small classes. Several "one on one" meetings also happened. An example is when Daniel Stevens KL7WM did "one on one" tutoring with Tom Taylor, KG7CFC, in 2013 to help Tom get licensed. Tom uses a wheelchair and couldn't get to a regularly scheduled class. Later in 2013, Tom upgraded to General. He has helped on the course in several ham nets at 5K runs in Federal Way in 2013 and is a regular on local nets like the 9 O’clock social net on Puget Sound Repeater Group (PSRG)’s repeater. There was a class where one student showed up. We taught the class with one student and he passed the Technician and the General test. He was happy, because he was a boater and wanted a General license for the HF privileges. Several New hams operated in the Seattle Marathon less than a week after they got their licenses from our class. Several parents and a grandparent brought their children to the classes. Most times both the parent and the child passed a test.

There is a Follow Up program to get the new licensees on the air and on the nets. The Technician Class has a 20 to 30 minute social net demonstration to explain repeaters and allow the students to hear good operating practices. This eases the Push-To-Talk button nervousness. The net controllers listen for and welcome the New operators. There have been Antenna Parties for hands on advance learning. The team's goal is to make operators and not just licensees. The team also follows up with those who fail to get their license at their first exam session. We try to get them into another FREE class, give them special tutoring and helps, and to keep in contact with them, until they get their licenses. This follow up program has been VERY successful. 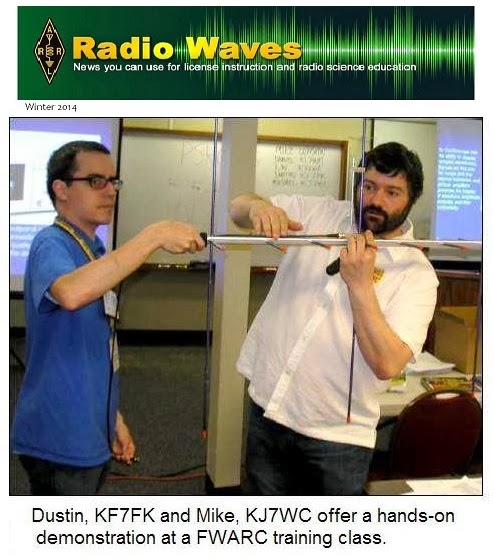 The Number of Students was because of the marketing ideas from Mike, W7BMW. Lynn Burlingame, N7CFO and the Mike and Key ARC announced our classes on their web sites. Our training philosophy is to have an exam at the end of each class. The VEs have two sets of graders facing the examinees for faster processing at the larger sessions. At one session the VEs graded 65 elements. The Value of the classes was because we were will to listen and to change and we were worked together. The Quality of the amateurs graduating is shown by the test results. There have been students traveling 60 and 90 miles one way to our classes. Others have been referred to our classes from as far away as Alaska. The average test scores kept getting higher throughout the year.

The 2013 Success was a team effort from all of you: 6 teachers and 23 VEs. Many students wanted to “give back” into the hobby so they became VEs and teachers. The numbers speak the loudest about our team: 169 New Hams, 204 licensed and/or upgraded out of 224 examinees with 90 to 95% pass rates. You are our SUPERBOWL Amateur Training and Licensing team.

A BIG THANK YOU goes to all who participated in the Federal Way ARC Training and VE program in 2013. I speak for the students and the examinees also. There have been many "Thank You" emails.  It would not have happened without you!