Jamboree-on-the-Air, or JOTA, is the largest Scouting event in the world. It is held annually the third full weekend in October. JOTA uses amateur radio to link Scouts and hams around the world, around the nation, and in your own community. This jamboree requires no travel, other than to a nearby amateur radio operator's ham shack. Many times you can find the hams will come to you by setting up a station at your Scout camporee, at the park down the block, or perhaps at a ham shack already set up at your council’s camp.
Tell Me More
Scouts of any age can participate, from Cub Scouts to Boy Scouts and Venturers, including girls. Once at the ham radio station, the communication typically involves talking on a microphone and listening on the station speakers. However, many forms of specialized communication may also be taking place, such as video communication, digital communication (much like sending a message on your smartphone but transmitted by radio), or communication through a satellite relay or an earth-based relay (called a repeater). The exchanges include such information as name, location (called QTH in ham speak), Scout rank, age, and hobbies. The stations you’ll be communicating with can be across town, across the country, or even around the world! The World Scout Bureau reported that the 2016 JOTA had nearly 1.3 million Scout participants from more than 30,000 locations, and reached 156 countries.
When Is It? Jamboree-on-the-Air is held the third weekend in October. There are no official hours, so you have the whole weekend to make JOTA contacts. The event officially starts Friday evening during the JOTA Jump Start and runs through Sunday evening.

As promised, here we go. Very similar to last year. But with some changes.
-------------------------------------
As we have in the past, the Woodinville ARES Group (WG7BSA) will run a “Jamboree On The Air” (JOTA) site at the North Seattle College this year. The site is part of the Chief Seattle Council’s Program & Training Conference, check out: http://www.seattlebsa.org/ptc-all and search for “JOTA” . We will be having a fox hunt, several sessions on “Ham Radio and Scouting” and a licensing exam session for Scouts to get their ham ticket. We will also have radio room with several HF and VHF/UHF GOTA stations to help the Scouts make contacts worldwide.

Our plans are to use the PSRG repeater for making local analog FM contacts given its wide reach throughout the general Seattle area. We also hope to make use of IRLP and Echolink so you might see linkages come and go throughout the day. We will be on the air intermittently between 10am and 2pm on Saturday, October 21st. If available, please monitor the repeater and help us by logging a contact with a Scout.

In addition to talking to a Scout over the Queen Anne Hill repeater, if you are able to come to the North Seattle College between 1pm and 2pm, we have a particular need for Morse code knowledgeable hams to assist us in one of our classes. BSA has a “Morse Code Interpreter’s Strip” that is earned by Scouts by demonstrating a Morse code proficiency at 5 wpm. We have over 20 scouts enrolled in the 1pm-2pm class for them to learn Morse code to earn their Interpreter’s Strip – with just one instructor. We’d like to have at least 3 or 4 additional helpers that can work with the Scouts one-on-one. If you know code and can help out at North Seattle College, please drop an email to Horace Hamby, N7DRW (hhamby@msn.com) and offer your assistance.

Come join us and talk to a Scout! 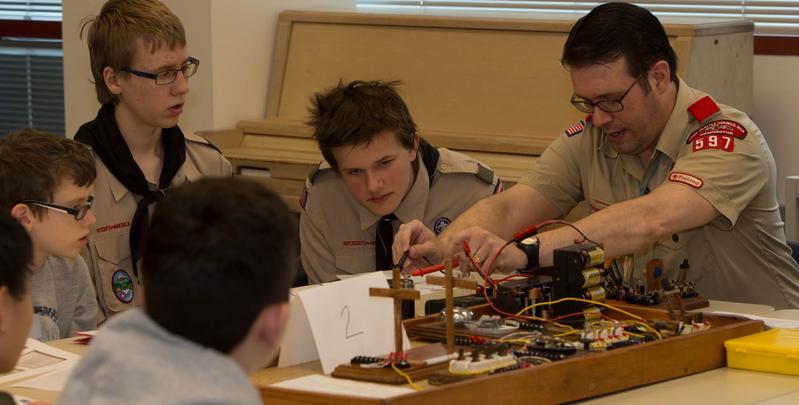